It finally happened this past Sunday. We were about to embark on a shopping trip and there it surfaced on our television just as we were about to leave.

Many years' ago we lived in an apartment and the landlord was adamant about just what pets were permitted.  Dogs were verboten, indoor cats with extreme reservation and smaller creatures were OK as long as they were not poisonous and could not slink out of their enclosure.

Our kids were curious about critters and they too wanted something to "boss-around" so we had made every effort to bring nature out of it's environment and into our living fun house.

We had cats that survived many years, as well as fish, turtles, mice, lizards etc. all "apartment size" and needing care.

We did purchase one creature that never made the grade, Tonto, our beloved parakeet.  The kid at the pet store, Lenny the bird expert, was introduced to us by the store owner.  In retrospect, that owner knew just what he was doing as Lenny had all the up-sell skills and sales pitches as good as they get at any appliance store or car dealership.  By the time we left Bird World of Pennsylvania we lugged around enough bags making us appear as if we were on a safari.

Tonto had to have not only bird food, he needed a large cage, water feeders, mirrors, toys, some scratchy thing to sharpen his beak (I learned the hard way that I should have left THAT piece in the store), perches and a plastic female "parakeet-love interest" to perch alongside him.

We believed it was so Disney-like. Here we were and all these critters could live in harmony, lions laying down with the lambs, all was right with the world everything peaceful and loving.

It turns out it was certainly cartoon like but not Disney, more in the order of Warner Brothers-Looney Toons.  It was Sylvester and Tweety Bird playing out right before our eyes. Cat chasing bird, bird striking cat with a frying pan, cat putting bird in mouth, bird lighting candle causing cat to spit out bird, feathers and fur flying all over the place.

Something went very-very bad, and needed correction.  Last in-first out so Tonto went packing and found a good home.

Our nest is empty and we are free to roam without having to care for neither youth nor pet.  Grandgirls visit along with their stuffed animals, but all that remains at the end of the day are the two of us and some dead plants.

So what happened this past Sunday?  My wife saw and ad on TV that turned her into my grandmother.

I take after my grandmother and buy anything I know my grand-girls will like.  There is no need to spend hundreds of dollars when the girls will get a kick out of the singing wall fish, bubbles, a perpetual drinking bird, dominoes or some other cheap cheesy little dollar store toy.

I recall my grandmother buying a cheap-o toy from a magazine ad.  It offered 100 dolls for $1.00.  Since she had about a zillion grandchildren, and usually a few were always hanging around, she knew that some of the girls would surely like the dolls.  I don't think she expected what she was going to get but her granddaughters happily played with them.

My wife, on the other hand, is very careful in her toy choices.  Each selection must meet strict standards for playability, design, color, engineering and the soccer mom seal of approval.  Her purchase usually involves "easy payment terms" and much assembly required.

Well there it was on the television and she just knew my cheesy antenna was now focused on the latest gotta get for the grand girls. To my shock and amazement she agreed with my selection and was racing me to dial the 800 number.

"Perfect Polly", the parakeet, is touted as the World's Perfect Pet" (that's a mouthful).  Polly is life size and very realistic, sits either on a perch or your finger and moves both her head and tail while chirping.  Just 2 AAA batteries, no food, cage or anvils to drop on the head of a stalking putty tat.

I cannot believed we finally agreed on a purchase.  I just hope the girls like it.  If not, I'll seek out Tonto and see if he could use another "love interest".

I dare you to view this commercial without laughing. Yes, it is unbelievable, really stupid and I bought a green one.

Polly and the Pirate

A two-legged Pirate walks into a bar and he’s got a one-legged mechanical Parakeet on his shoulder.
The bird has a golf tee replacing the missing appendage.

The bartender says to the Pirate “Hey Buddy, what’s the deal with the one-legged Parakeet”?

The Pirate replies “ARRRRRRRRR I bought her at a cheap “As-Seen-On-TV” display at a major department store.”


He continued “I took her out of the box, installed her batteries, put her on her perch.  The perch is defective and she fell and her right plastic talon came off where it was glued”.

The bartender said, “ What kind of a funny punch line was that”?

The Pirate replied, “ARRRRRRRRR it’s not funny, I am out 15 bucks! 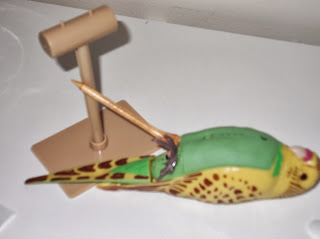 Polly, The Pirate and the Store Clerk

A Pirate walks into the return department of a major department store.
He has a boxed one-legged mechanical Parakeet sporting a golf tee for the missing appendage.

Billy, the Return Department clerk, inspects the package and looks perplexed because something appears different but he cannot seem to put his finger on it.

Suddenly he has a "Eureka" moment and turns to the Pirate and asks "do you know the bird still has the batteries inside her chest"?

The Pirate replies "leave 'em there.  Just give me my 15 bucks and I'll be gone".

Billy refunds the purchase and wishes the Pirate a nice day.

The Pirate says "ARRRRRRRRRRR" and shoves off.

Email ThisBlogThis!Share to TwitterShare to FacebookShare to Pinterest
Labels: The Granny Parakeet