Send in the Clowns

I don’t know exactly how many fears exist, I am certain that any book professing a complete listing has yet to meet everyone on the planet.


If you do a search for such a list you will probably chuckle at some, shake your head in disbelief at others and possibly have compassion on people who may be paralyzed by things you and I wouldn’t consider an issue.


I have often read that one of the top fears is public speaking, ahead of spiders, Teflon and even death.


I have my own personal nail biters but being the center of attention is not one of them, especially if fueled by a Yuengling lager.  Bring on the lampshades.


I will reveal my all time greatest fear, entering a roomful of only-women. No I do not fear women, my life overflows with them.  Wife, daughter,daughter-in-law, mother-in-law, sisters, sister-in-laws, granddaughters, nieces, friends, neighbors and coworkers you name it they are all around me and I love them all.


The gender itself is not the issue it’s when they all get together in a room and a man enters, any man, and you can actually hear something click in their mind and it goes like this: “a man just entered a room, we are all having fun, we need to give him something to do”!


The equation is this:  Women having fun + man enters room = man works.


I am certain if George Clooney enters a roomful of women they all say, “Wow, he’s really hot, now give him a tool belt and send him on his way”.


Eventually they will say that.


In the 1980’s a new term, Courlophobia, was termed to address an issue that many people had, namely the abnormal fear of clowns.  I don’t understand why it took so long to find a name for something that causes uneasiness in many people, after all clowns have been around for a long time.


When I was a kid clowns were everywhere. I do not know why it took a whole generation or two to decide that they were not good for us.  Clowns were to be loved.  They did magic tricks, pratfalls, climbed into tiny cars, had squirty flowers, they juggled, rode unicycles and had faces painted with big red smiles, almost as much color as Aunt Esther’s lipstick.


Clowns had some really bad press in the past few decades.  Serial killers were party clowns, killer clowns were the subjects of horror movies, and even Ronald McDonald was getting a bad rap for promoting happy meals that contributed to obesity in children.


My mother was a fan of the clown.  She often told me that one of her favorite comedians, Red Skelton, painted clowns.  While still in the womb my mother decided a paint-by-number clown picture would be just perfect to adorn my nursery room.


Here it is for you to see. 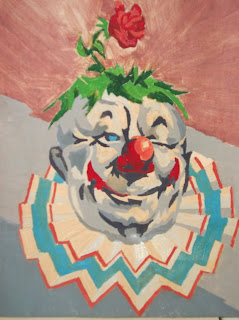 I never thought it was harmful, he appeared so benign and friendly but a family priest refused to enter my room without 1st sprinkling with holy water and Sandy, the family mutt, my best friend and protector, would cower and whimper next to my crib each night.


My wife convinced me to get rid of it after she swore she saw his lips moving.  I tried everything but nothing seems to destroy it.


It is buried; face down, in a trunk in the backyard. It does keep stray cats from digging in our garden.


I am not convinced that I suffer from Courlophobia, but recently I was about to enter a local convenience store and was stopped short of entering because of this sign: 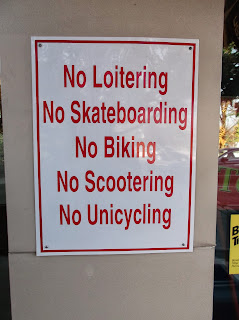 Unicycles-Yikes!  There may be clowns in here.


I didn’t bring any holy water so I left.